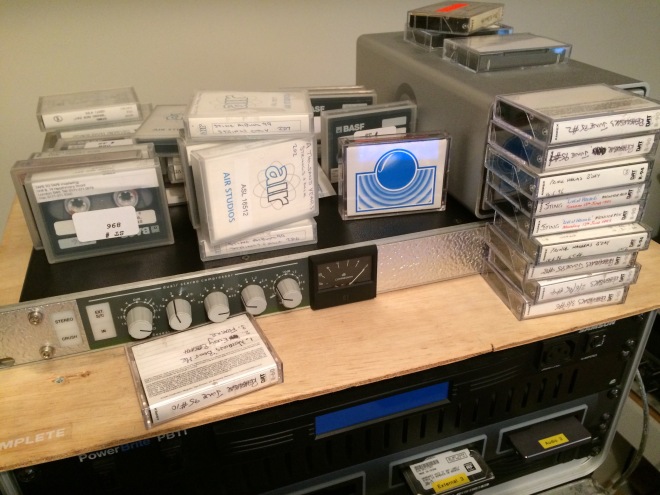 Second month of the new website and I am trying to get up to speed with the ability to blog at will via email. Is my life that exciting, can I really post interesting articles and anecdotes. Will stories of pro audio, my social life, general rants and the odd joke be engaging ? Time will tell I suppose but in the mean time I am enjoying the writing, I just hope my reader is equally enthusiastic

The Sting archive project is finally heading towards the final stretch, albeit there is still a large box of stuff to do and nothing in the archiving world happens quickly. I have backed everything up to a new set of Hard Disks and in turn each drive is being backed up to LTO6. I believe backup safety is in multiple copies across different media. It takes about fourteen hours to back up a two terabyte hard disk, that includes full verification. I tend to run the backup over night, that way I can go to bed feeling like I am still working and then when I get up before I do anything I feel like I have achieved something. Smarter than the average bear Boo Boo, whatever happened to Yogi Bear ?

I have copied all but a handful of the 350 DAT tapes, BASF in particular caused me a lot of problems. However, baking them at 40 degrees for three days did help a lot and made most of the tapes playable. Sadly Sting went through one particular period where every DAT tape seemed to be BASF, around the end of the last century, when he released his biggest selling solo album, Brand New Day. I’ve had a few tapes snap and I have repaired these by fitting each reel into new shells. It is a particularly fiddly job that requires a steady hand, patience and for me now, glasses !!

At the beginning of February I went, at the kind invitation of G-tech, to the MPG awards at the Grovesnor House Hotel. Never been before, to the MPG or any other awards ceremony. I did debate going to Vegas when I was nominated for an Emmy but as I’m not a fan of the town I let that one go. So I drank for too much at the MPG awards bumped into some people I know that I haven’t seen for a very long time, which was a real pleasure, wish I’d had more time to talk to some of them, it’s only at industry things where you get a chance to chat and catch up.

So I have renewed my Avid service contract for another year and looking forward to installing the next revision of Pro Tools, 12.5 I believe. I have upgraded to Melodyne 4 and planning to goto Omnisphere 2 as well. Although those few upgrades do add up in value quite quickly. I have recently really started getting into Kontakt, and am adding regularly to my library of sounds. There are some amazing instruments out there for Kontakt and at very reasonable prices, I have been buying and am looking forward to posting some of music later in the year. My favourite new toy is my S!NG™, it’s a phantom-powered precision reference tool. If you haven’t got one you should get one, brilliant for trouble shooting.

So the old web page is no longer, I have just deleted the DNS and Web Forwarding and hopefully the new WordPress DNS will come online in the next few hours and this site will go live under www.donalhodgson.com for the first time. I doubt many trumpets or brass sections will burst into instant fanfare but who knows, maybe the odd Mariachi band will strums few major chords in appreciation.

I’ve still got a lot to learn about working with WordPress and more importantly what I want my site to say, I love that fact that I can email in updates about what I’m doing, maybe one day that brass band will blow me a small fanfare !!

So on with the learning and it’s not just WordPress I also have to get a better handle on Pixelmator so I can add some decent images to the site, as an audiophile editing images doesn’t come naturally. I have always been a keen photographer but I’ve never been that inspired by post camera manipulation. I prefer to get the image as good as possible when I’m out in the field. The best photo compliment I’ve had is about a NY taxi image I took as it drove down passed the Met, I got some really good motion blurring. My friend thought I’d done it in Photoshop, that made me feel pretty good. I suppose instead of hours wandering the streets with my camera I could have done 5 minutes and then rest at home, bit like tuning a vocal !! Doesn’t really matter what your medium is or what tools you have at your disposal, great work takes time, however you choose to do it.